Jeremiah Camacho slammed a four bagger to open the monthly championship match and erase the 38-pin handicap advantage from 2nd seed Sebastian Loyola.  After a mid-game struggle, Camacho got back on his striking mode and closed the game with a five bagger for a 244 game and the title as Loyola was unable to match the top seed’s output.

In the semi-final match, Loyola missed the first three frames as 3rd seed James Doyle opened a 36-pin lead.  However, tide changed as Doyle opened on the 8th frame that provided an opening for Loyola.  With a 16-pin handicap advantage and Doyle unable to close out the match, Loyola came back with a double on the 9th and 10th frame to edge out Doyle 171+46 to 183+30.

In the first step ladder match Doyle opened the match with a five bagger as 4th seed Noah Taimanglo’s turkey placed him in a hole throughout the set which prevailed for the higher seed.  An errand frame by Taimanglo in the 7th gave Doyle a 27 pin lead.  Noah Taimanglo finished with a four bagger, but fell short by 7 sticks against Doyle’s 21 pin handicap advantage.

Camacho led all competitors averaging 218 pins per game finishing with a 907 total including handicap.  Loyola finished in second with a 875 total followed by James Doyle, Noah Taimanglo, Frank Manibusan Jr., Darien Borja, Victor Yalung, Jared Petrus, Xander Borja and Jacelyn Espiritu rounded off the top ten.  The next Guam Youth Bower of the month will be held on Sunday, February 4, 2017, 11:00 a.m. at the Central Lanes Bowling Center. 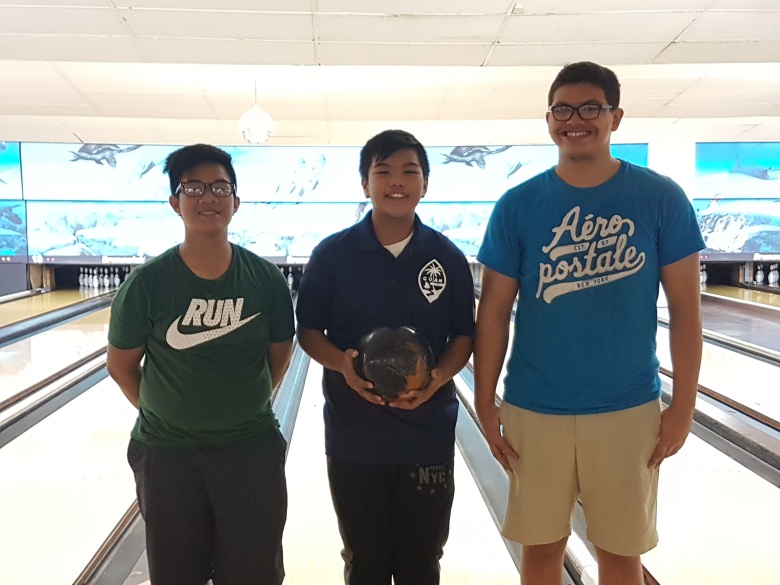