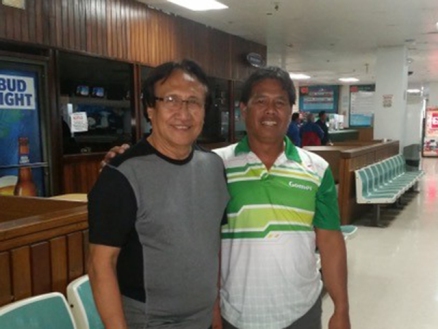 With his wife cheering him on in the championship final, Gomez Martinez pulled off the impossible by upsetting top seed veteran champion Art Gatmen 234-198 with handicap to capture the July Senior Bowler of the Month title.

Gatmen led the tough six game qualifying round with a 1275 pinfall. The lane pattern gave fits to the other competitors as it kept the margins close with several leads changing hands as the games progressed to the knockout rounds.

Going into round two, Hernandez continued his run with an upset victory over 3rd seed Manny Torre. Roberto however, had her way ot the title halted with a narrow loss to 4th seed Buddy Saludo who advanced to the semi-finals.

Gatmen ended Hernandez’s title shot 237-202 to head into the finals. Martinez on the other hand took advantage of open frames from Saludo coupled with an nearly error free game to win 229-159.

The championship game came down to the left handed Martinez and the experienced right hander Gatmen who has been in the championship position many times in his career. But on this day, he had an open frame in the fourth to give his rookie opponent an opportunity. Martinez also had a little help in the way of three strikes in the first four frames and a couple more in the eight and ninth frame to seal his victory.

When asked why he did well in the final, he quipped “My wife is here so I have to do good!” It could not have come at a better time for this first time winner.

The next monthly senior tournament will be at 11AM, Sunday, August 27th  at Central Lanes. This tournament is open to all bowlers aged 50 or will be 50 by December 31, 2017. This is a handicapped event with a cash prize going to the top four finishers. For more information contact Central Lanes bowling counter.