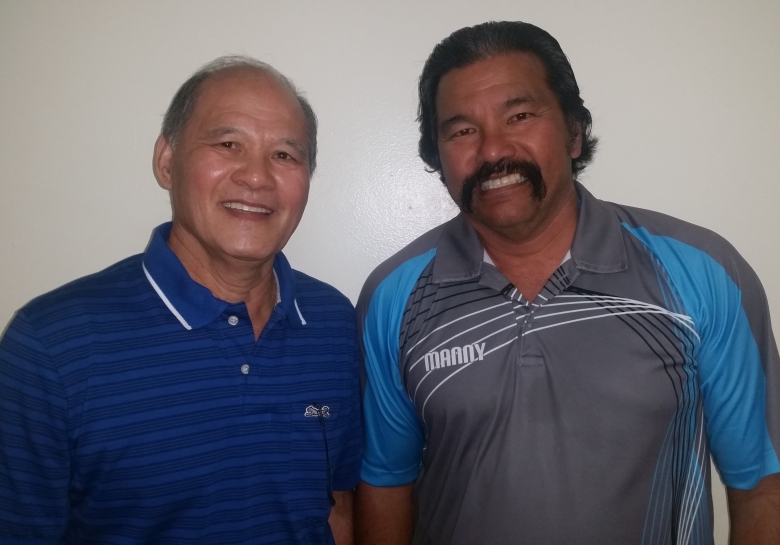 Veteran kegler Buddy Saludo sowed the stuff champions are made of by coming through in the title match from his fourth seed standing to outgun third seed Manny Torre 235-195 with handicap and capture the November Guam Senior Bowlers Association Bowler of the Month championship. It was a very satisfying victory for Saludo who was struggling in the qualifiers earlier in the day.

The qualifying rounds were a little tough Sunday morning at Central Lanes as Jim Pinaula led the field with a 1298 pinfall count and a 208 average. The shoot-out rounds started with eighth seed John Tenorio romping over sixth seed Rudy Palaganas and tenth seed Nestor Valencia 258 to 195 and 191 respectively with handicap. In the odd number bracket, ninth seed Ray Manibusan bullied his lady opponents, fifth seed Thelma Arriola and seventh seed Mary Pangelinan with a romp victory of his own slamming six strikes in a row en route to a 258 to 204 and 174 win respectively with handicap.

The quarterfinals were tighter as Tenorio fell to Torre 189-159. Saludo took a narrow 201-194 over Manibusan as he had to get critical strikes and an open frame by his opponent to move on to the semifinals.

Then the unthinkable happened as the top two seeds fell to their respective foes. Top seed three time 2017 winner Jim Pinaula was upset by Saludo 192-177 as a missed spare by Pinaula cost him a shot at a fourth title this year. Torre, on the other hand won with what tournament chairperson Rick Torres quipped, “The Battle of the Mannys” as second seed Manny Tagle also was upset by Manny Torre 220-195 to head into the championship match.

With the last monthly tournament match underway, Saludo suddenly erupted with four strikes in the middle of the match that would have put the game out of reach. But Torre kept his composure as he marked along frame by frame till a split in the latter part of the match ended his chance at the title. For Saludo it has been a long time between his last title chance and was obviously elated with this victory.

The win set up Saludo’s spot in the December Grand Finals for the 2017 Senior Bowler of the Year Tournament on December 17th at 11AM at Central Lanes. This tournament consists of the the defending champion Virgil Toledo, the winners of the monthly tournaments and the highest ranking senior bowling participants who did not win a title this past year.