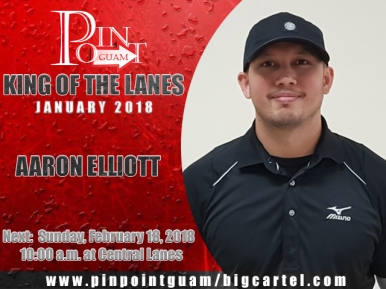 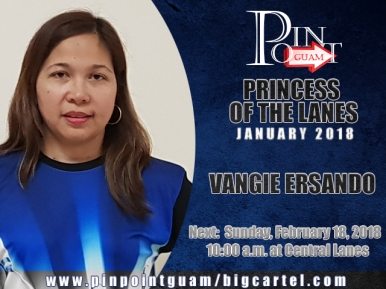 Aaron Elliott and Vangie Ersando bagged the January titles of the King and Prince of the Lanes held on Sunday, January 21, 2018 at the Central Lanes Bowling Center.  The modified event consists of a four-game sprint hosted by Pin Point Guam.

Both Elliott and Ersando finished in the top ten after the four-game qualifier defeating their foes in the elimination rounds to capture the year’s first monthly event.  3rd seed Elliott opened the elimination round trailing 9th seed Jae Sang Lee in the first half of the match, then took advantage of a missed frame with a turkey before slipping past the lower seed by two pins to advance to the quarter final round.  He then missed on the first frame against 4th seed Zachary Ford then put together a series of strikes to take the lead from Ford and easily outdistanced Ford in the closing stanza 234-212.  Elliott routed 2nd seed RJ Santos in the semi-final as Santos was unable to find his rhythm throughout the set, falling 159-192.

In the monthly final match-up, Elliott faced 7th seed Noah Taimanglo who dissed top seed Bruce Calip in the semi-final 184-176.  Elliott led from the onset, but Taimanglo was able to keep the match close throughout the game.  Elliott was able to close out Taimanglo with a spare and eight count for a 215-210 victory.