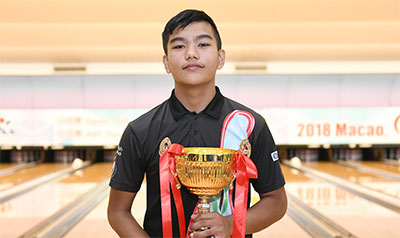 Camacho began the tournament in a tie for fifth place with a 210 game.  He amassed 266 pins during the second game which propelled him to the top post.  He struggled in the third game with three open frames, surrendering the lead to Hong Kong’s Jupiter Tan. In the fourth game, Camacho strung six strikes for a 258 game and reclaimed the lead which he never relinquished.  He followed up with games of 213 and a 256 to build a 100 pin lead over the Taiwanese kegler Tseng with two games remaining as he cruised to the championship.

“I didn’t really know what place I was in during the event. I learned I won after everything was over,” said Camacho. The tournament is not over for Camacho, he also qualified for the graded masters finals which will take place Friday evening. The Guam contingent at the Macau Open consists of two players with national team captain Jay Leon Guerrero making the open division finals as well and will compete over the weekend.

Camacho averaged 220.62 in the masters’ event, he finished first of 24 bowlers. “I’m happy with my performance but I’ve also learned a lot from today and I’ll make some adjustments for the graded finals tomorrow”.