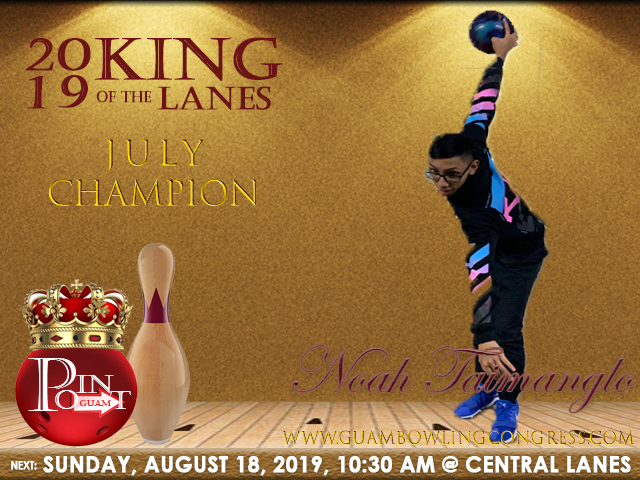 Noah Taimanglo and Jeremiah Camacho, fresh out of the Asian Schools Bowling Championship in Hong Kong, battled for top honors in the July edition of the Pin Point Guam King and Prince of the Lanes. 8th seed Taimanglo found his groove early in the match and never looked back as top seed Camacho was unable to find his path from the 254 average pace he set during the qualifying round. The end result had Taimanglo earning his second monthly title via a 246-170 set.

Both Taimanglo and Camacho entered into the finals round through tough battles in the semis. Camacho got past 7th seed Nikko Gutierrez in a high scoring affair 245-226. Taimanglo slid by 2nd seed Ricky Duenas with a bit of luck as a 7-10 split on the final stanza by the later ended with a 237-219 decision.

Shannon Bukikosa claimed the July 2019 Prince title as she out bowled top seed Jaeceline Espiritu 193 to 179 after beating Ben Taimanglo in the semi final in a low scoring affair. Bukikosa beat out Philip Lopez 144-133 in the quarter finals.

Espiritu led the qualifying round with a 196 average followed by Nick Gutierrez, Virgil Toledo, Frank Manibusan Sr. and Bukikosa rounded off the top five.