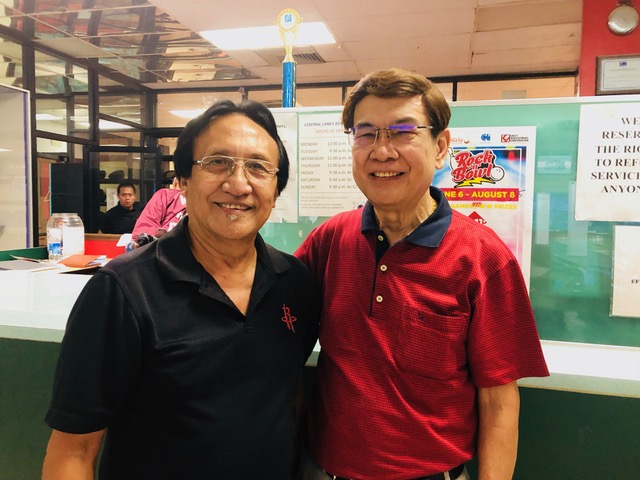 Third seed Art Gatmen had to win the hard way as he bowled through three games to down top seed Gene Bangayan, 213-181, 197-215, 246-195 and take the Guam Senior Bowlers Association January makeup bowling crown. The tournament completes the first half of the season for 2018.

Gatmen stopped Norton in the second round 237-155 while Mandapat lost to John Salas in a thrilling 218-216 tenth frame showdown.  The semi-finals gave way to more bowling drama as Bangayan had to eke out a 210-205 victory to stop Salas title quest. Gatmen got a handful from second seed Manny Torre as he had to beat Torre twice, 225-175 and 239-140 to advance to the title match.

Gatmen drew blood first in the title series with a 213-181 victory in the first to two wins for the championship. But Bangayan came back in the second game to down Gatmen with a 215-197 win to force the third deciding game.

The two competitors and good friends decided to get down to business and after going even after the first five frames, Gatmen opened up with a barrage of strikes from the sixth to the 10th frames to seal his win and capture the makeup tournament crown for January. Gatmen and Bangayan gave the sparse crowd of fellow senior bowlers all they could take Sunday afternoon. It was fitting as well because the top eight finalists of this contest are all preparing to participate in the Fifteenth Asia Senior Bowlers Championship to be held in Okinawa Japan this coming December.

The July tournament will be held next week on Sunday July 29th at 11AM. Interested bowlers must be or become members of the Guam Senior Bowlers Association. Rules and tournament information are available at the Central Lanes bowling counter or you can contact tournament chairperson Rick Torres at 687-4291 or via e-mail at rstorres@teleguam.net.