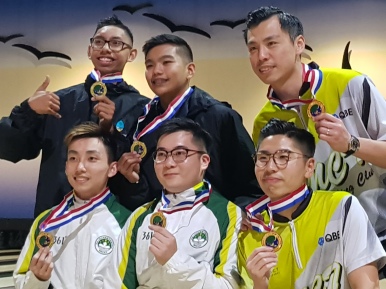 It was a joyous celebration for the young tandem of Noah Taimanglo and Jeremiah Camacho as they earned their first Asian Intercity medal of their young career.  Competing in their second team format competition in as many years, they worked together to form a strong bond that has proved beneficial on the lanes.  Tears of joy streamed from the jubilant young core as they were proudly congratulated by their peers along with player/coach Jay Leon Guerrero.  An emotional Leon Guerrero conveyed his sentiments as the victorious lads along with the members of the team unified for a group hug.

The doubles team opened the event with a subpar performance to start off the competition in eighth place.  At the turn for game two, they managed to find their groove as their confidence level increased to move up three positions with a 484 set.  A lowly game three set dropped them a post to sixth.  However, both bowlers bounced back in game four with a 511 total to move up to third place and medal contention.  Sixteen-year-old Taimanglo started the game with an open, then blasted ten strikes in a row for a 266 game while Camacho drove in a 245 game.  The two bowlers shared the load in the fifth game moving up in the standings to second place before closing out the six-game set by bouncing back in the mid frames to hold off strong advancements by teams from Hong Kong and Malaysia.  The 2629 total edged out the team from Happy Valley, Hong Kong by 38 pins as fifteen-year-old Camacho poured in a 1323 total while Taimanglo added 1306.

Macau’s tandem of Lei Hok Kin and Lee Tak Man shot lights out from the get-go to clinch top honors with a 2804 set.  Guam’s other doubles teams of Michael Gadia and Charlie “MamaChar” Catbagan finished in ninth place with a 2477 total, Frank Manibusan Jr. and Jay Leon Guerrero dropped in a 2381 set for twelfth place and Sebastian Loyola and Cesar Villanueva ended in 27th.

According to Guam Bowling Secretary-General Joey Miranda III, the team consisting of four youth and four adult members are using this event in preparation for upcoming international events.  The youth squad will return to Kuching in April for the Asian Youth Championship while a couple adult members are gearing up for the World Men’s Championship in Hong Kong later this month.

Taimanglo now leads the group in the All Events with a 2588 total in 8th place.  Camacho moved up from 23rd to twelfth while Gadia dropped five places to 14th.  Leon Guerrero and Manibusan are in 26th and 27th respectively as Catbagan improved two-fold to jump to 30th place.  Loyola (49th) and Villanueva (51st) round off the Guam competitors.

Action continues with the team of four events at 9:00 a.m. (Kuching time) on Saturday, November 3, 2018 as the top sixteen competitors from the all events advance to the master’s Championship.

2021 King and Prince of the Lanes simulation will be held on Sunday, January 31, 2021 at 1:30 p.m. at the Central Lanes Bowling Center.  All COVID-19 protocols will be observed during the session.