4th seed Charles Catbagan grabbed an early lead over 7th seed Noah Taimanglo during the Aloha Maid King of the Lanes monthly finals after Taimanglo opened the first two frames of the match. Taimanglo found his groove bolting eight strikes in a row to claim his third monthly title. The win ties RJ Santos for the most titles during the year and earned him pole position in the year long standings.

The semi-final round pitted top seed Jeremiah Camacho against Taimanglo and 2nd seed Michael Gadia versus Catbagan. Both matches opened as a strike fest as each bowler struck four frames of five to start off the match. However, a pin seven by top seed Camacho put him 21 pins behind Taimanglo after six frames while the other match was knotted at 148 through six frames. Camacho fought back after Taimanglo spared a 3-6-10 leave but left a 4-6-10 split on the ninth frame to end his opportunity to advance to the finals falling by two pins 233-231. Catbagan shut the door on the 2nd seed with punching out on the 9th and 10th frames to advance to the finals 247-226. 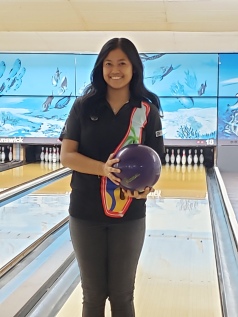 The Prince of the Lanes finals between second seed Kalen Bradley and fourth seed Jaeceline Espiritu was knotted up through six frames with the eight-pin handicap advantage of the higher seed. A missed spare by Bradley in the 8th frame put Espiritu ahead by 19 pins heading into the foundation frame. A double by Espiritu knotted up her first title of the year and claimed her spot for the year end Grand Finals.

The year end Grand Finals is scheduled for Sunday, December 22, 2019, 10:00 a.m. at the Central Lanes Bowling Center. The event will feature the monthly winners of both divisions along with bowlers who accumulated the most points during the year long event. Top prize of $1,000.00 along with the championship cup will be hoisted by the winner of the event.